Don't be fooled by its small size: the Firestudio Mobile packs a lot of interface into a diminutive case.

Shop for presonus at Best Buy. Find low everyday prices and buy online for delivery or in-store pick-up. The Presonus Firestudio Mobile is a deceptive little beast. At first sight, it appears to be yet another dinky little 24‑bit/96kHz stereo I/O interface with mic/instrument options, but once you look on the rear panel you find another six line inputs.

The Presonus Firestudio Mobile is a deceptive little beast. At first sight, it appears to be yet another dinky little 24‑bit/96kHz stereo I/O interface with mic/instrument options, but once you look on the rear panel you find another six line inputs. There's also a separate stereo headphone output alongside the main stereo outs, and when you include the coaxial S/PDIF I/O, this brings the total to 10 inputs and six outputs. It also comes with an impressive accompanying software bundle comprising Presonus's Studio One Artist DAW software for PC and Mac and over four gigabytes of virtual instruments, plug‑ins, loops and samples.

First impressions are good: this little box is built like a tank, with a reinforced metal chassis that should last for years during mobile recording duties. The rotary controls are firm but smooth for repeatable settings, and before you scan the spec, yes, it can be powered from the Firewire bus if plugged into a six‑pin Firewire 400 port, so the supplied wall-wart PSU can be avoided.

Even when the Firestudio Mobile is powered via the 12V DC on offer from such a port, internal trickery ensures that the two XMAX Class‑A mic preamps can be run from 30V rails, and that a full 48 volts of phantom power is available for plugging in condenser mics, both of which ensure plenty of headroom. Presonus are also unusual in avoiding op‑amps in their preamp circuitry, in favour of discrete components (in order to avoid crossover distortion), while the instrument input impedance is a high 1MΩ for guitar use, all of which augurs well for audio quality.

On the digital side, I suspect that not everyone will like the four‑way breakout cable for the S/PDIF and MIDI I/O, but this is the only real way to keep the case as small as it is. I was pleased to see some very specific advice on compatible Firewire chip sets in the manual, along with a list of suitable PCI and PCI Express Firewire cards, and that the Presonus drivers support up to four units from the Firestudio range, with a healthy maximum limit of 52 inputs and outputs in total.

The Presonus Firestudio family all use the same Universal Control utility, with a Launch window where you set up buffer size, clocking arrangements and the like. However, most of the day‑to‑day work will be carried out in the virtual mixer of the Device window, where you can set up three different monitor mixes to feed the main, headphone and S/PDIF outputs respectively, using a familiar set of level and pan sliders, mute/solo buttons and peak‑reading meters. It doesn't take long to get up to speed, and once you do, the Load/Save buttons are really handy for retrieving different setups.

At the rear we find an input for the 12V PSU, two Firewire ports, a connection for the MIDI and S/PDIF breakout cable, and two outputs and six inputs on quarter‑inch jack sockets.

I was impressed by the audio quality of the Firestudio Mobile, which is clean, clear and extended, with good stereo imaging and depth. The mic preamps provide a generous 70dB maximum gain for quiet sources or low-sensitivity mics, and offer a smooth, open sound. The headphone amp is also perfectly loud enough for even high-impedance phones (the level markings even go up to 11 as a warning!), which is yet another advantage of the high voltage rails. Being able to set up a totally separate monitor mix for this headphone output is also a handy extra.

During my audio comparator listening tests, the Firestudio Mobile eclipsed my Emu 1820M budget benchmark with its more focused stereo imaging and greater front/back depth, but sounded slightly constricted compared with my far more expensive Lavry DA10, placing it firmly in the high-quality area of the mainstream market, along with other manufacturers such as Focusrite and TC Electronic.

Using Rightmark's Audio Analyser test suite, frequency response proved to be well extended at the bass end (‑0.3dB at 15Hz). While the analogue electronics at the top end apparently extend to ‑0.3dB at 50kHz, this is restricted overall, as with many other interfaces, by the digital filters, in this case to about 23kHz with a sample rate of 96kHz. Total distortion levels were lower than many, at 0.002 percent, while noise level measured a rather good ‑106dBA.

My CEntrance Latency Test Utility audio loopback measurements showed total extras (A-D, D-A and 'hidden' buffer delays) of a constant 467 samples whatever the sample rate, equating to an extra 10.59ms at 44.1kHz. I could happily run the Firestudio Mobile on my PC at its lowest buffer setting of 256 samples, for an acceptable minimum input latency of about 8ms at 44.1kHz, and this slight delay is no problem in practice because zero-latency monitoring is also available. However, with this 256‑sample buffer the real‑world output latency was a rather larger 12ms — perfectly acceptable to most (but not all) musicians for playing soft synths 'live'.

Nowadays, there are plenty of compact audio interfaces offering a pair of mic/instrument preamps, but few offer a total of eight analogue inputs and four analogue outputs in a package as small as this. The robust, all‑metal case also makes it an ideal candidate for being carted around on location, and the fact that it's daisy‑chainable with other Firestudio interfaces means that you can add more inputs and outputs later on if your requirements increase.

To survive in a very competitive market, audio interface manufacturers have to make sure that each new model they introduce offers at least a slightly different feature set from its competitors. With the Firestudio Mobile, Presonus have managed to offer quite a lot that's different at a very competitive price. I expect it to become rather popular!

If you're looking for a compact and portable Firewire audio interface with two mic preamps and several line‑level inputs, there are various possible alternatives. Suitable models to look at include the Alesis I/O14, Echo Audiofire 4, Edirol FA66, Focusrite Saffire LE and TC Electronic Impact Twin. All have broadly similar specs, although none offer as many analogue inputs as the Firestudio Mobile. 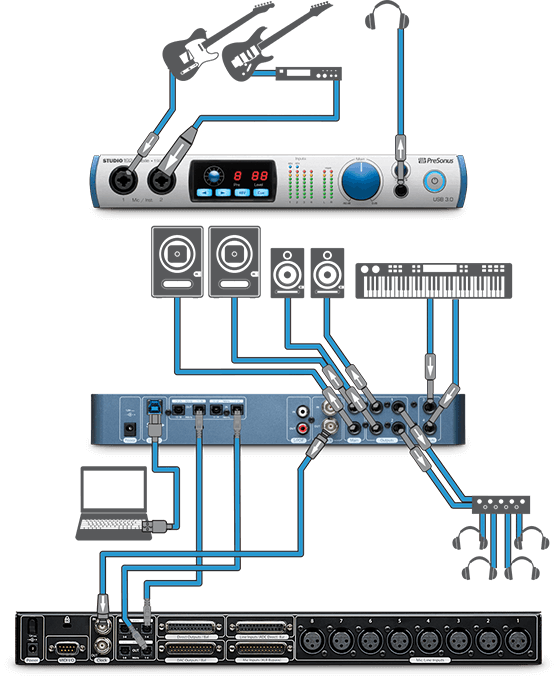 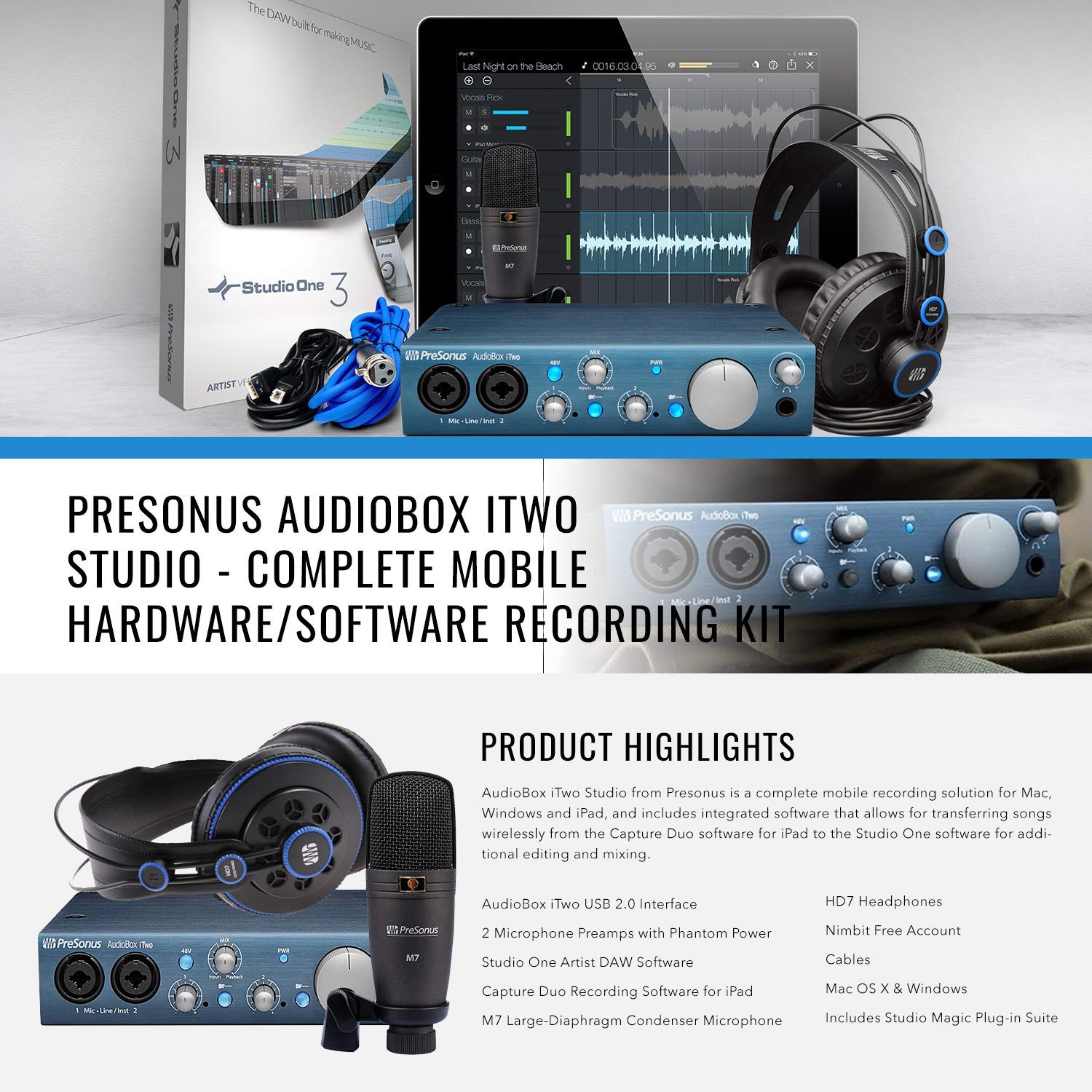 The Presonus Firestudio Mobile does what it says on the tin, providing similar audio quality to the rest of the Firestudio range, but in a much more portable, bus‑powered package suitable for both mobile recording and studio use.