When using the standalone version of the software, the drivers must be installed manually. Refer to the Driver Install link below for instructions.

When using the standalone version of the software, the drivers must be installed manually. Refer to the Driver Install link below for instructions. Logic Logic16 User’s Guide - Saleae. This is USB Saleae Compatible 24MHz 8Channel Logic Analyzer Latest Support 1.1.15 Sampling rate up to: 24 MHz The logic for each channel sampling rate of 24M / s. General applications around General applications around. The latest Saleae Logic 1.x Beta software can be downloaded below. Simply download and run the installer. From the command line, navigate to the Driver folder.

We provide nightly Windows installers for sigrok-cli and PulseView (require Windows XP or higher). Please test and report any issues you encounter.

In order to use libsigrok (via a sigrok frontend) on Windows, you need to install the proper driver for the respective device.

If your device is connected through a (virtual) COM port, libsigrok generally doesn't need a special driver. Please install the driver as provided by the manufacturer. If you are unsure, you can check if your device appears at the 'Ports (COM&LPT)' section of the Windows Device Manager.

Exception: If the libsigrok driver uses the chip, for example an FTDI chip, in a special mode (i.e., not as a plain COM port), the Zadig steps outlined below will be required. One example for that is the 'ftdi-la' libsigrok driver.

The device specific USB driver shipped with the vendor software is not going to work in almost all cases. You will need to install the WinUSB driver.

For installing the WinUSB driver you can use the Zadig executable. There are two versions, one for Windows XP (zadig_xp.exe), and another one for all other (Vista or higher) supported Windows versions (zadig.exe). Both 32 and 64 bit Windows versions are supported.The sigrok-cli and PulseView installers ship with both Zadig executable files for convenience and they're available from the Windows 'Start' menu (the Zadig *.exe files themselves are located in the installation directory of the respective application).

If you already installed the vendor driver previously, you need to run Zadig and switch to the WinUSB driver (see above). There's no need to uninstall or deactivate the vendor driver manually, Zadig will handle all of this.

Note: For some devices (such as the Hantek 6022BE, for example) you might have to assign the WinUSB driver via Zadig twice: the first time for the initial USB VID/PID the device has when attaching it via USB, and a second time after the firmware has been uploaded to the device and the device has 'renumerated' with a different VID/PID pair.

You'll need to copy the extracted files into one of the directories where libsigrok will search for firmware files. The list of those directories can be found in PulseView's 'Settings->About' dialog in the 'Firmware search paths' section, or in the sigrok-cli '-l 5' log output.

Example paths on 64bit PulseView on 64bit Windows 10 (might vary on other systems):

The Windows installers ship with example dump files (from our sigrok-dumps repository), which are located in the examples subdirectory of the install directory of sigrok-cli and PulseView.

These files can be used to conveniently test various frontend features and protocol decoders, and so on.

See the list of currently known Windows issues in Bugzilla.

This happens if you don't have the

The root cause for this is that the above download will install the otherwise missing file msvcr100.dll (and possibly others) which is required for running sigrok frontends. The requirement is imposed by python34.dll to be more specific, which we use/need for running protocol decoders.

Please download the respective Microsoft Visual C++ 2010 Redistributable Package and install it, that should fix the issue and allow you to start sigrok-cli and/or PulseView.

If a libsigrok frontend such as sigrok-cli or PulseView doesn't seem to find your device, that could have multiple reasons:

(FX2 based) logic analyzer terminates acquisition before the specified limit.

Got trouble getting captures with an FX2 based logic analyzer at higher samplerates. Acquisition terminates before the specified amount of samples or time. Logs contain a message that the device '... only sent [a smaller amount of data]'.

That's a known constraint of the ubiquitous FX2 chips which are found in many cheap and thus rather popular logic analyzers (and also in some oscilloscopes). The high rates of 24MSa/s for up to 8 logic channels, or 12MSa/s for up to 16 channels, are near the theoretical bandwidth limit of the USB 2.0 connection when communication overhead gets considered. In addition the FX2 chip only has little memory for to-get-transmitted data (covering the fraction of a millisecond). That's why successful communication heavily depends on the PC's capability to process the data which the FX2 chip provides. The slightest hiccup causes a FIFO overflow in the FX2. Lost data cannot get recovered, and it's uncertain which period of acquisition time was affected. So the only remaining option is to terminate the acquisition.

How do I see debug output from PulseView on Windows?

Because of the division between console and graphical subsystems in Windows, debugging output is not directly visible in console like it would be on Linux.Instead, in normal Windows builds, debugging output can be seen in PulseView settings window 'Logging' tab.

The default log level is 2 (errors only). To capture full debug output, PulseView can be started with option `-l 5`, which is done by the `PulseView (debug)` shortcut created by the installer.

However, if the whole PulseView application crashes, the debug log in settings window disappears also. For these cases you should download the debug build from above. It will open a separate console window that will show log messages.

Note: This should generally not be necessary for users, please just use the provided nightly installers (see above).

Get the sigrok-util git repository, which contains instructions as well as scripts to help in the below steps.

If you really want to build from source, we recommend you use the sigrok-cross-mingw script from the sigrok-util repository (that uses MXE) to cross-compile the Windows binaries on a Linux system.

Native builds are generally not supported by us! Yes, they can work in theory (see below), but it means a lot of hassle compared to a cross-compile using the above script, and native builds are not really well-tested by us.

If you do want to build the sigrok subprojects natively on a Windows system (instead of using the cross-compile method, see above) we recommend you use MSYS2. More information is available on the MSYS2 introduction and the MSYS2 installation pages.

Please read our README for details on how to set up MSYS2 in general, how to install the sigrok dependencies, and so on.

Then, use our sigrok-native-msys2 script to build all required software components. 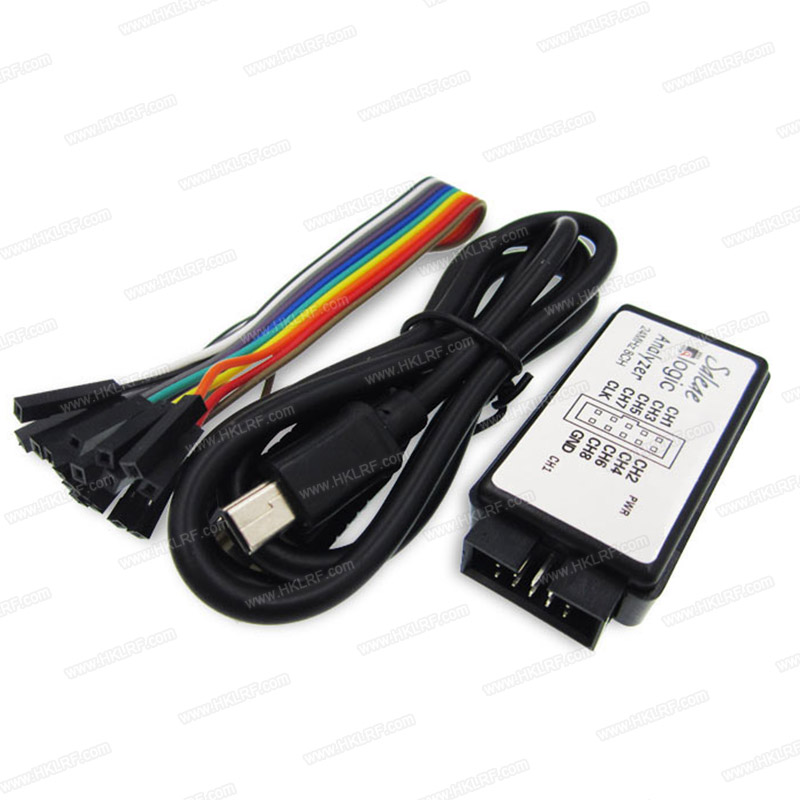 The Saleae Logic is a USB-based, 8-channel logic analyzer with up to 24MHz sampling rate.

The unit itself is very small, and has a USB 2.0 port connecting it to a PC (and powering the unit) and a connector for the 8 + 1 probe set. It is built around a Cypress EZ-USB FX2LP microcontroller — an 8051-compatible chip with built-in USB 2.0 controller. It can sample 8 channels up to 24MHz.

In sigrok, we use the open-source fx2lafw firmware for this logic analyzer.

See Saleae Logic/Info for more details (such as lsusb -vvv output) about the device.

The case has four Torx T2 screws you need to remove in order to be able to open it.

Since we use the open-source fx2lafw firmware for this device, we don't need to know the protocol.

However, for those interested in this, see our old vendor protocol docs.